This is according to a recent study of more than 25 000 consumers across 20 markets performed by Kantar on behalf of the Norwegian Seafood Council. The study is the largest seafood consumer study of its kind and offers invaluable insight into seafood consumer behaviours and preferences over time.

Three quarters of those who report eating seafood once a week or more say they have already made changes to their or their family’s diet to be more sustainable, compared to just over half (56%) of those who eat seafood less frequently.

"This clear link between seafood consumption and sustainability doesn’t surprise us. People increasingly want to know where the food on their plates come from, and eating more responsibly sourced seafood is a good way to make your diet more sustainable", says Tom Jørgen Gangsø, Director of market insight at the Norwegian Seafood Council.

He points out however, that the study is based on self-reported consumption and attitudes and there may be a difference between what people believe and what they actually do.

"Nonetheless it is a clean indication that people increasingly want to make more informed choices about the food they eat", says Gangsø.

The same study also found that three in four respondents want to eat more seafood in the future.

Whilst the correlation between seafood consumption and having made changes to the diet exists in all markets surveyed, there are some major differences seen between the markets.

"Interestingly we see that in western countries such as UK, US and Spain the trend is very much driven by the younger age groups having made changes to their diets, whilst in Asian markets the pattern is similar across all ages – and much stronger", says Gangsø.

In China and Thailand more than 8 out of 10 respondents reported having made changes to their dies to be more sustainable. This compares to around 60 percent in most European markets.

"This insight highlights the importance of communicating to consumers that choosing sustainable seafood can play a part in the solution to climate change. Responsibly sourced seafood is a delicious, healthy and sustainable option, and thus fits perfectly with the consumption trends of today," says Gangsø.

Eating more seafood is part of the solution to tackling climate change, according to a report by the High Level Panel for a Sustainable Ocean Economy. 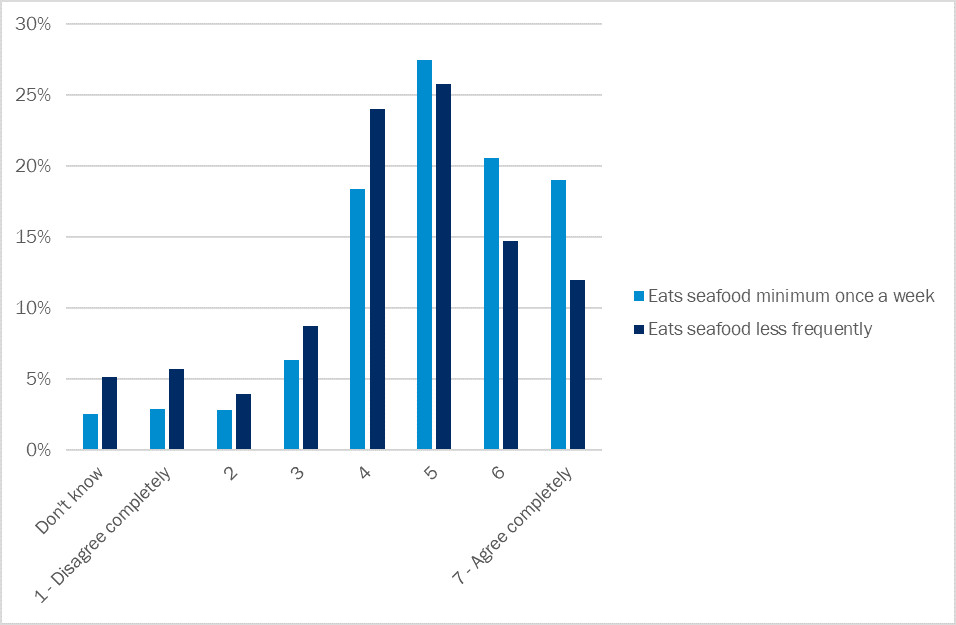 Respondents asked to rate how strongly they agree with the statement “I have made changes to my/my family’s diet to be more sustainable”, and the correlation with seafood consumption.

The Seafood Consumer Insight is an annual online survey performed by Kantar on behalf of the Norwegian Seafood Council. The number of markets and respondents vary somewhat each year but amounts to between 20-25 000 respondents across 20-25 markets. Number of respondents in each market is typically between 1000 and 2500 and is a representative cross-section of the population of people who eat seafood.

According to a large international study by the Norwegian Seafood Council, 76 percent of consumers say they want to eat more seafood than they do today.

Norwegian aquaculture companies hold 4 out of the top 10 spots in the 2019 Coller FAIRR Protein Index, ranking 60 of the world’s largest publicly-listed protein producers on how they perform on sustainability.

In 2019, Norwegian salmon farms have near eliminated the use of antibiotics, new data shows.

For the fourth year running, the Coller FAIRR index of the world’s most sustainable protein producers has ranked Norwegian aquaculture companies as best in class. Of the seven companies ranked as “low risk” for various parameters linked to sustainability, three are Norwegian aquaculture companies.
On the list of the 60 largest, publicly listed protein producers globally, Mowi, the world’s larg

NSC and EAT announce partnership ahead of UN summit on future food systems. The aim is to join forces in speaking up for seafood as part of the solution to tackle climate change.

This is just one of the points raised by EAT founder Gunhild Stordalen when asked how to inspire a new generation of seafood consumers in a chat with Norwegian Seafood Council CEO Renate Larsen at this week’s North Atlantic Seafood Forum (NASF).
Stordalen and her organization EAT has been appointed by the UN ahead of this autumn’s Food Systems Summit, the first of its kind, to come up with gro