After the MSC suspended certification of North Sea Cod, the Norwegian Seafood Council urges consumers to be vigilant about origin. Norwegian cod comes from one of the world’s most sustainable fish stocks.

It is not easy being a conscious consumer these days. They are bombarded with headlines about what to eat and not eat, often failing to communicate the whole picture, only serving to misinform and confuse consumers who are trying to make healthy and sustainable food choices.

Most recently, the humble cod fell victim to the media’s drive to sensationalise events. As the Marine Stewardship Council (MSC) removed their certification of North Sea Cod, several media, particularly in the UK, ran headlines announcing that cod is now off the menu. This could not be further from the truth.

- There is absolutely no reason at all to stop eating cod, If anything, most people would benefit from eating more lean fish than they do today. As long as consumers are vigilant about where their fish comes from, cod is a very sustainable seafood option, says Hans Frode Kielland Asmyhr, UK Country Director at the Norwegian Seafood Council.

Cod is not off the menu!

Whilst the North Sea cod stock is in a bad state, pretty much all Norwegian cod comes from a different cod stock, one often hailed the most sustainable cod stock in the world. The North East Arctic cod, the stock from which close to 100 percent of all exported Norwegian cod originates, is certified by the MSC and has a Norwegian quota of more than 300 000 tons.

- Thankfully, we have stringent quota systems based on world class research and stock calculations, which protects our vital ecosystems so we can continue to sustainably harvest and enjoy some of the best foods from the sea for generations to come, says Kielland Asmyhr.

In the UK, which is the most important market for Norwegian cod and haddock, many news stories have recently claimed the nation’s favourite dish could be in danger, due to the dwindling North Sea cod stocks. 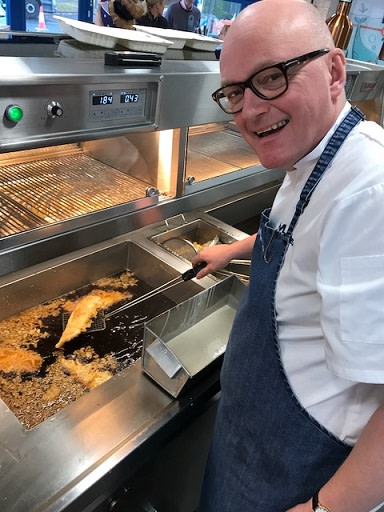 - It would be a great shame if consumers started to believe that cod and chips is no longer a sustainable option. The fish & chips segment in the UK is increasingly concerned about not only quality, but also sustainability, and more and more of the top chippies swear by Norwegian fish, says Kielland Asmyhr.

In 2018, Norway exported nearly 200,000 tons of cod valued at 9,5 bn NOK to markets around the world. The largest consumer markets for Norwegian cod is Portugal, UK and France.

Get ready for skrei season - The world's finest cod is here!

Pristinely white flesh, succulent and with a delicate flavour, skrei is in a different league to its regular cod brothers. It is the result of the epic journey Norwegian skrei undertake every single winter.
As they have done for thousands of years, cod from the depths of the icy Barents Sea migrate over 1,000 kilometres to the shores of Northern Norway every winter. It is a hazardous journey,