No other animal farming uses less antibiotics than Norwegian aquaculture. In 2019, Norwegian salmon farms have near eliminated the use of antibiotics.

Fresh data from the annual report on antibiotics use in Norwegian aquaculture confirms the continued success of the salmon industry’s focus on minimising the use of antibiotics in their production. In 2019, only 16 prescriptions were issued for Norwegian salmon farming, the lowest ever recorded, meaning 99 percent of Norwegian salmon were produced completely without antibiotic treatments.

Year on year, the use of antibiotics to treat illnesses in farmed salmon has dropped, and from already negligible numbers in 2018, a further 77 percent reduction was reported in 2019. Thanks to effective vaccines and focus on fish welfare, there has been a 99 percent reduction in the usage of antibiotics in Norwegian ocean-farmed salmon since the late eighties. The measures have been acknowledged by The World Health Organization, who has recognized Norway’s effort to reduce its use of antibiotics in fish farming.1

“Norway has never produced more salmon than in 2019, yet the use of antibiotics continues to drop. This is the result of strong focus on fish welfare and food safety in the industry, and we are proud to say Norwegian aquaculture is the best in the world when it comes to antibiotics use in animal food production,” says Renate Larsen, CEO at the Norwegian Seafood Council.

In 2019, 1,3 million tonnes of salmon were farmed in fjords along the Norwegian coast. The industry only had to use 222kgs of antibiotics. In comparison, the Norwegian land animal farming used 4,673kgs in their production, something which is also very low by international standards.

Larsen points out that despite the Norwegian industry’s solid documentation, many myths around farmed salmon and antibiotics still exist.

“Many people still believe antibiotics is a problem for farmed salmon, which couldn’t be further from the truth. It is a well-documented fact that the usage has been almost zero for many years. Consumers can feel confident that Norwegian salmon are antibiotics free, and a safe and healthy choice on their dinner plates,” says Larsen.

The 2019 NORM-VET report is the twentieth annual report of its kind, presenting data on resistance and usage of antibiotics in Norwegian animal husbandry and food production. 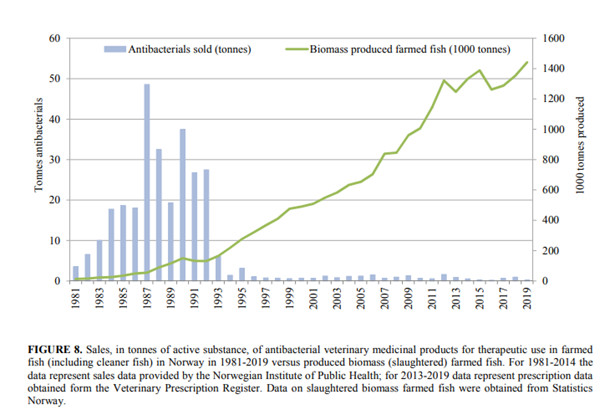 Norwegian aquaculture companies hold 4 out of the top 10 spots in the 2019 Coller FAIRR Protein Index, ranking 60 of the world’s largest publicly-listed protein producers on how they perform on sustainability.

The success recipe for eradicating antibiotics in Norwegian salmon farming

For the second year in a row, the world’s largest salmon producer, Mowi, reigns at the top of the list of the world’s most sustainable protein producers. In total, three Norwegian seafood companies are ranked among the top 10.
The Coller FAIRR Protein Index looks at how the world’s 60 largest publicly listed companies producing meat, dairy and seafood performs on various risk factors relating t

This is just one of the points raised by EAT founder Gunhild Stordalen when asked how to inspire a new generation of seafood consumers in a chat with Norwegian Seafood Council CEO Renate Larsen at this week’s North Atlantic Seafood Forum (NASF).
Stordalen and her organization EAT has been appointed by the UN ahead of this autumn’s Food Systems Summit, the first of its kind, to come up with gro

Norwegian salmon farmers are always striving to raise the bar on sourcing the highest quality, nutritious and sustainable feed.
Whilst Norwegian salmon has been fed purely certifiably non-deforestation grown soya for years, the industry has joined forces using their market power to drive broader change and end the trade of deforestation soya to other industries.
This year, the industry has